Featuring the best: Looking back at 80 years of Fulcrum features

2022 is the year that the Fulcrum celebrates 80 years of publication! To commemorate the occasion, as well as learn a bit about the past, I’ve taken a dive into our archives to find ten features from several decades of Fulcrum reporting.

1964: “The Functions of a Campus Newspaper” by R.H. MacDonald 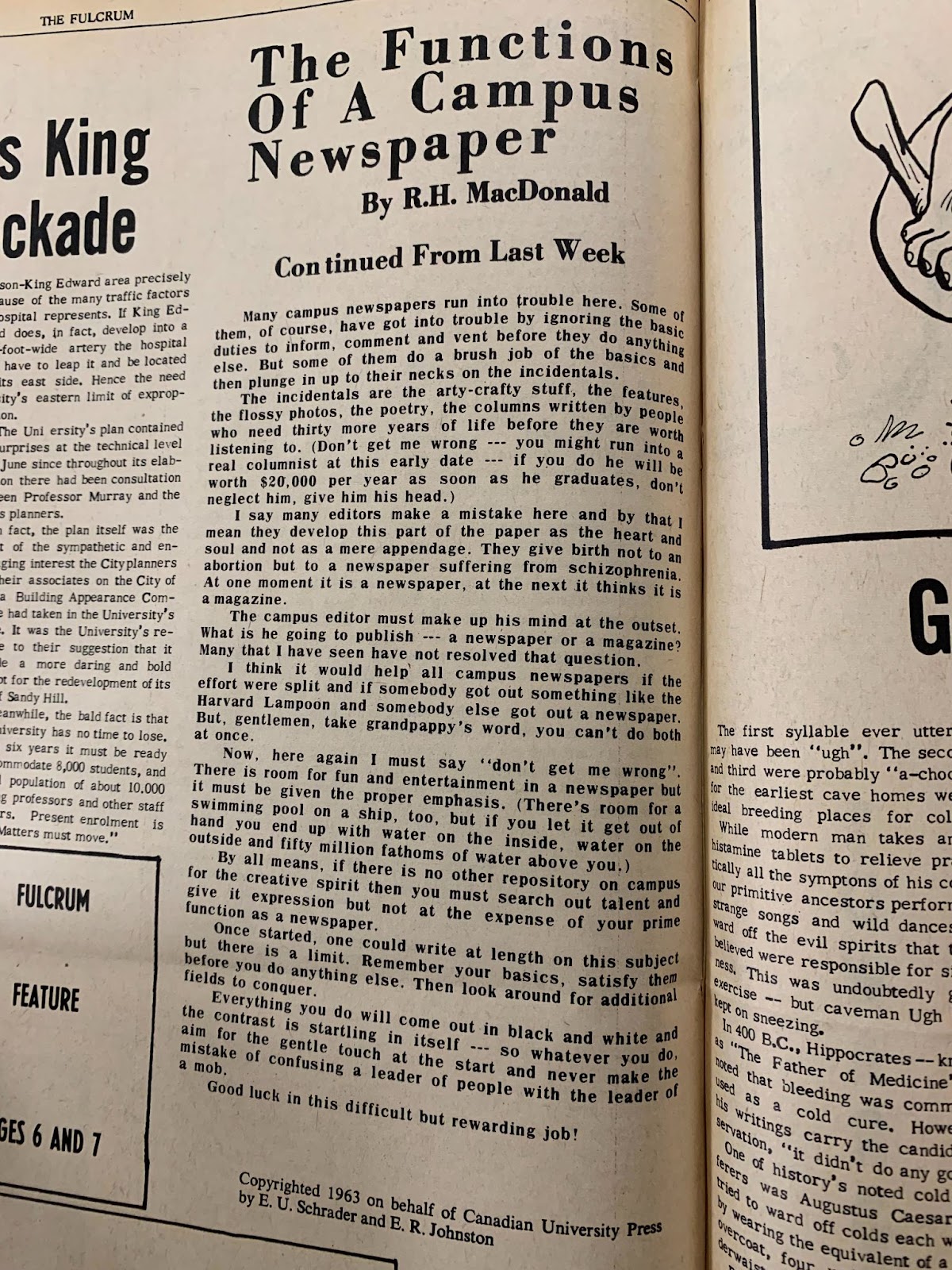 Ever since 1964, students and faculty have been questioning what occurs on their campus and what they need to know going forward. Luckily, MacDonald is here to remind us the main function of a campus newspaper — to inform.

“Photos, features and laughs are okay. But they are okay only after the essential function of the paper has been served. The newspaper worth the name is the one that pays attention to basic community first (…)”.

MacDonald also went on to say the foundation of a newspaper is dependent on the community they serve, with the troublesome details to follow.

“Student newspapers don’t need world news, the local daily will look after that. However, if the campus paper looks off-campus for news, the first place it should look is at other campuses.”

1976: “Unionization of Professors” by Roger Fisher 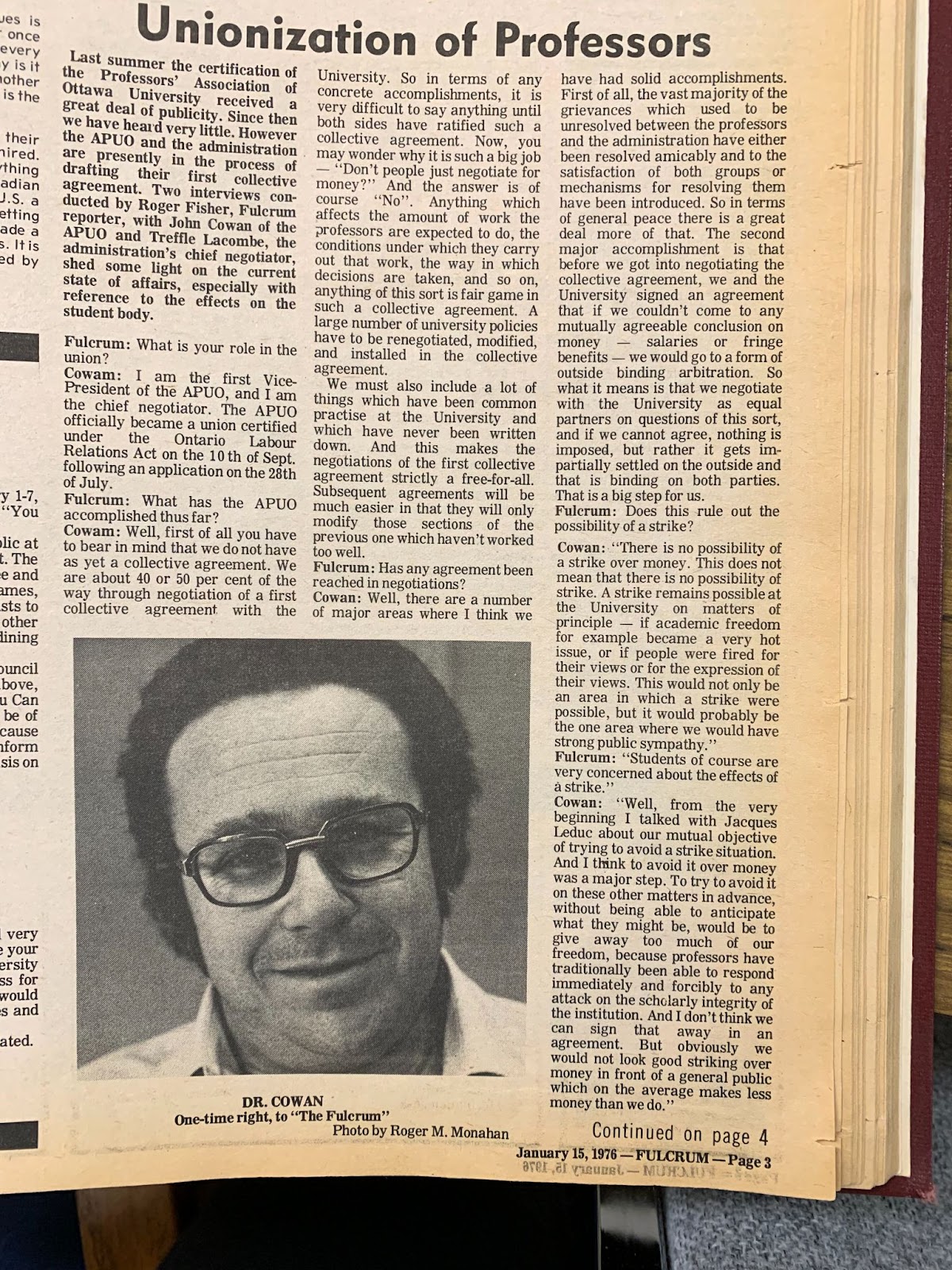 Though not a “textbook” feature by most standards (textbook is used loosely because features are very flexible), the Fulcrum interviewed John Cowan, the first vice-president of the Professors’ Association of Ottawa University (APUO), following their unionization in 1975. Treffle Lacombe, the University’s chief negotiator, was also interviewed, as both the APUO and the administration were drafting their first collective agreement at the time of publication.

“Fulcrum: Has any agreement been reached in negotiations?

Cowan: (…) The second major accomplishment is that before we got into negotiating the collective agreement, we and the University signed an agreement that if we couldn’t come to any mutually agreeable conclusion on money — salaries or fringe benefits — we would go to a form of outside binding arbitration.”

“Fulcrum: What do you think will be the most difficult aspect of the negotiations?

Lacombe: (…) Money is always an important issue because people have to be able to afford to live in our society, but in an academic setting such as ours, the monetary clauses take less importance than they would in an industrial setting.”

“Fulcrum: How much support does the APUO have from among the teaching staff?

Cowan: Membership is not compulsory, none the less, 97 per cent of the people who could be members are members. (…) We had a referendum before we applied for certification, and out of an 83 per cent turnout, 80 per cent voted in support of what was being done.”

“Fulcrum: Do you welcome this ‘new era’ of collective bargaining?

Lacombe: There is no doubt that it will have a serious effect on the operation of the University. Personally I have a considerable amount of respect for the previous era, but I am well prepared to adapt and to live within the conditions of the new one.” 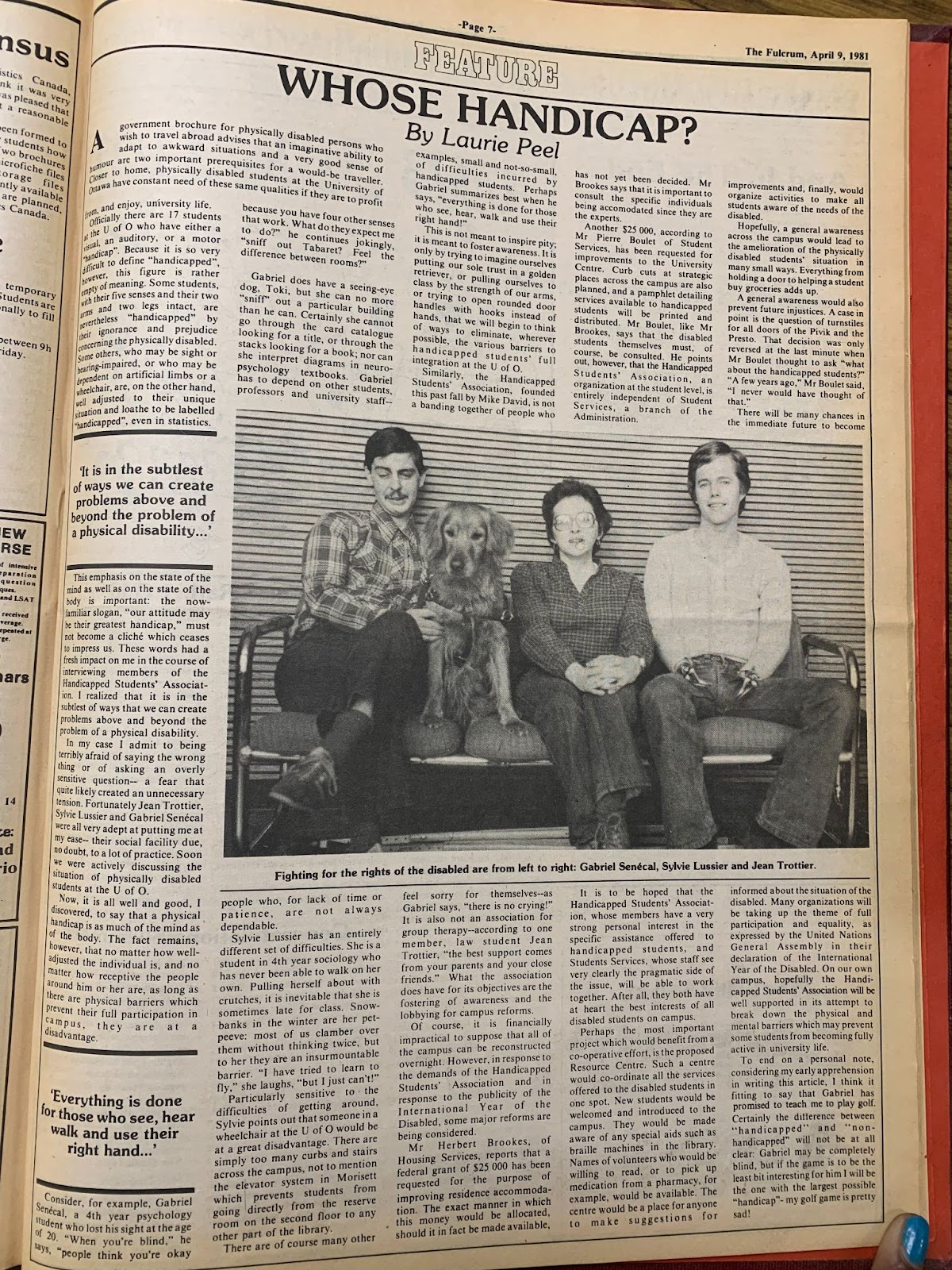 Back in 1981, there were 17 officially registered students at the University who had a “handicap,” but even then, it was still difficult for people to define a “handicap” or, in modern terminology, a “disability.”

Peel was honest about her own ignorance and spoke to three students — Jean Trottier, Sylvie Lussier, and Gabriel Senecal — about their experiences as a neglected minority within the university’s population and their lives on campus.

“‘When you’re blind,’ [Senecal] says, ‘people think you’re okay because you have four other senses that work. What do they expect me to do?’ he continues jokingly, ‘sniff out Tabaret? Feel the difference between rooms?’ ”

Re-visiting the article 40 years later is quite sombre, understanding that students with physical disabilities still struggle with the abundance of curbs, stairs, and that pesky Morisset library elevator.

With highlights from the then-recently founded Handicapped Students’ Association, these students are not looking for pity but for solidarity, awareness, and concrete campus reforms.

“Hopefully, a general awareness across the campus would lead to the amelioration of the physically disabled students’ situation in many small ways. Everything from holding a door to helping a student buy groceries adds up.”

1995: “Realities: Parents make ends meet while looking to the future” by Marc Duhaime 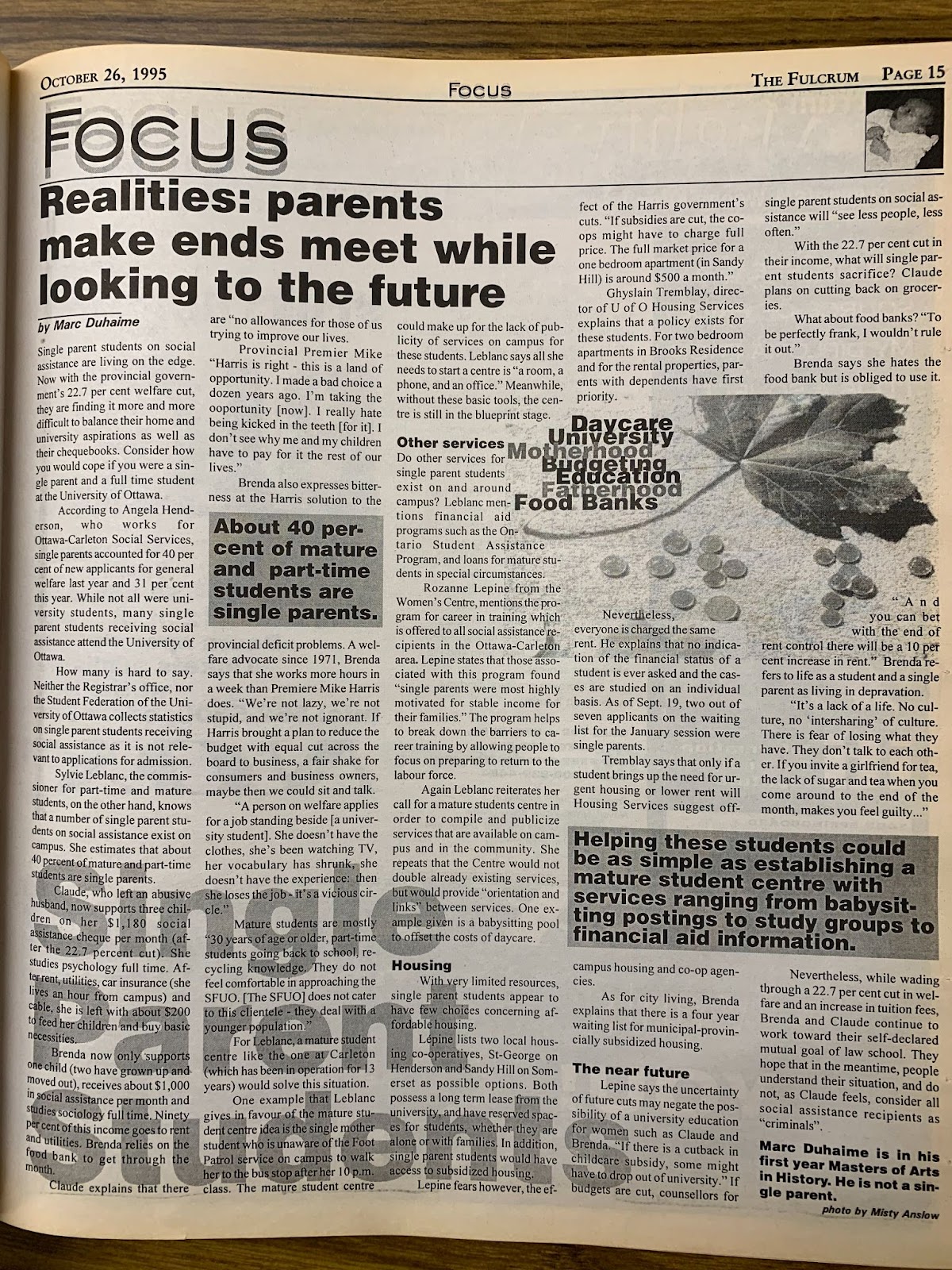 n 1995, then-Ontario premier Mike Harris made dramatic cuts to social services, health care, and education in an attempt to balance the provincial budget (sound familiar?). This was met with several articles opposing Harris throughout the Fall issues of the Fulcrum, plenty of public outcry, and an infamous two-week teachers’ strike.

However, I’ve chosen to highlight a more quiet, yet important, population who was struggling on both ends of this event — single-parent students. Although records surrounding single-parent students are difficult, many of them were included in the 31 per cent of applicants for general welfare at Ottawa-Carleton Social Services.

“Claude, who left an abusive husband, now supports three children on her $1,180 social assistance cheque per month (after the 22.7 per cent cut). She studies psychology full-time. After rent, utilities, car insurance (she lives an hour from campus) and cable, she is left with about $200 to feed her children and buy basic necessities.”

It was estimated that about 40 per cent of mature and part-time students are single parents. Many may feel hesitant to approach the student unions on campus (then-Student Federation of University of Ottawa (SFUO)) due to their priorities with younger populations. In addition to this, there are efforts to combat stereotypes that those on welfare and social assistance are ‘lazy’ and ‘uneducated.’

Commissioner for part-time and mature students, Sylvie Leblanc, “reiterates her call for a mature students centre in order to compile and publicize services that are available on campus and in the community.”

2002: “Man versus media: the macho image” by Joanna Markle 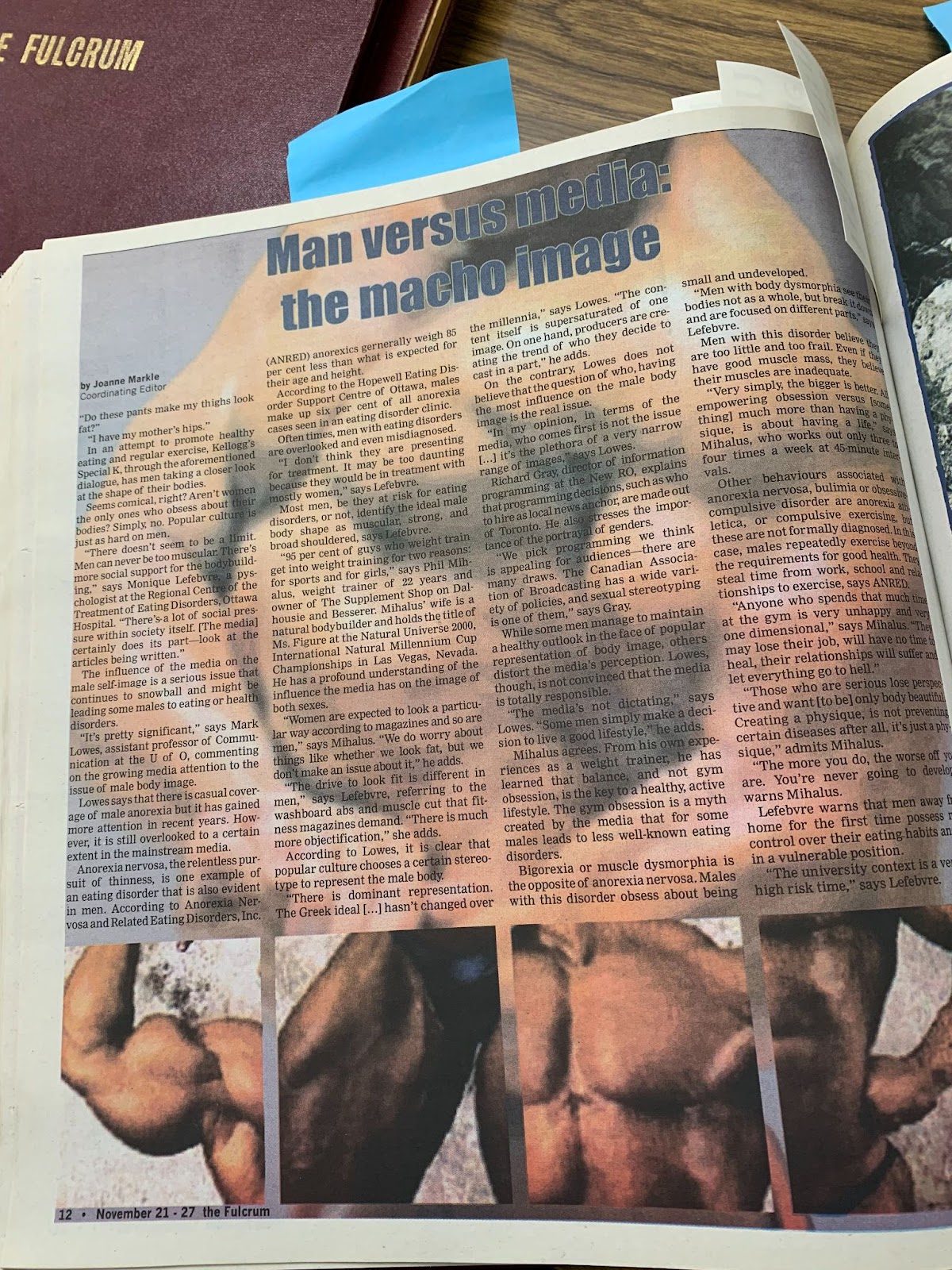 In my personal favourite year (the one of my birth), I’ve found a thought-provoking piece regarding the portrayal of men and their bodies in the media, shattering the notion that only women can be overly critical of themselves from every physical angle.

Monique Lefebvre, psychologist at the Regional Centre of the Treatment of Eating Disorders at the Ottawa Hospital, acknowledges the tremendous amounts of pressure applied to men regarding their public images.

“‘The drive to look fit is different in men,’ says Lefebvre, referring to the washboard abs and muscle cut that fitness magazines demand. ‘There is much more objectification,’ she adds.”

“While some men manage to maintain a healthy outlook in the face of popular representation of body image, others distort the media’s perception. [Mark Lowes, assistant professor of communication at the U of O] is not convinced that the media is totally responsible.”

Lowes cites that some men simply want to improve their lifestyle. Phil Mihalus, weight trainer for 22 years and owner of The Supplement Shop (which is still there!) highlights the importance of balance to achieve a healthy lifestyle. “The gym obsession is a myth created by the media that for some males leads to less well-known eating disorders.” 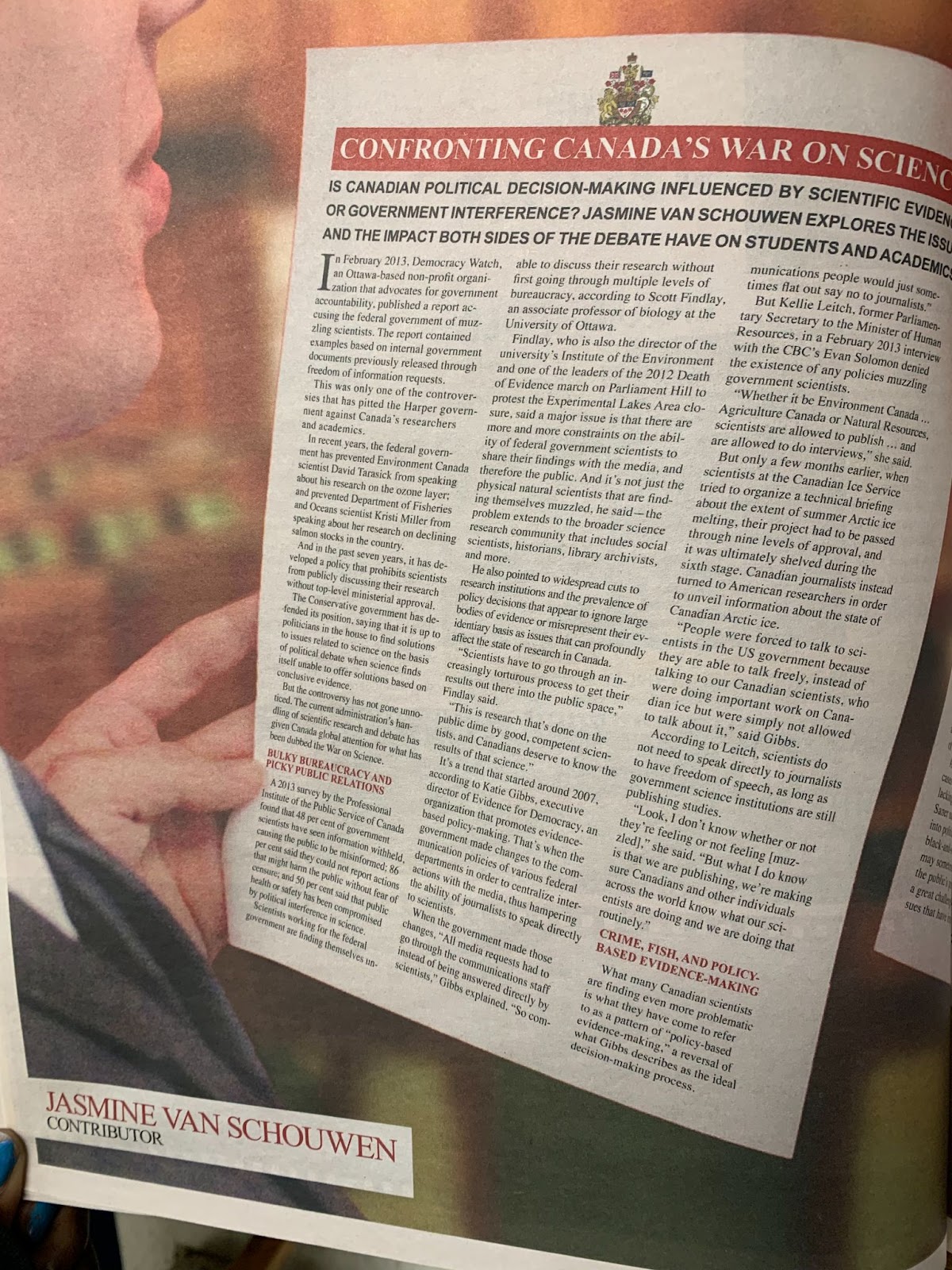 Many say that history repeats itself, which just makes this feature regarding the government’s attempts to deter and silence scientists during the midst of the Harper government, all the more important.

One infamous example was the federal government’s prevention of allowing Environment Canada scientist, David Tarasick, to discuss his research about the ozone layer in 2011. But this is just a sample.

“(…) When scientists at the Canadian Ice Service tried to organize a technical briefing about the extent of summer Arctic ice melting, their project had to be passed through nine levels of approval, and it was ultimately shelved during the sixth stage.”

Tensions between the science community and the government further escalate when they have to fight funding cuts to research, research-focused institutes, and the dismissals of scientists themselves.

Scott Findlay, an associate professor of biology at the U of O and then-director of the University’s Institute of the Environment, has highlighted the difficult hoops scientists must go through to have their research published, with government interference adding onto this struggle.

“[By cutting funding,] you are sending a signal that as a federal government you are not interested in science. That message starts to get through to the people that would otherwise be going into science, and so you start to lose the next generation of science capacity.”

The best thing about the size of our campus is all the nearby services. Your tuition and fees pay for these services, so you might as well use them. Beyond the unique programs they offer, these resource centres also offer challenging and fun volunteer and work opportunities. Here’s a list of some of the best.

What are we resolving?

New Year’s resolutions rarely stick, but if you approach them correctly, you’ll succeed