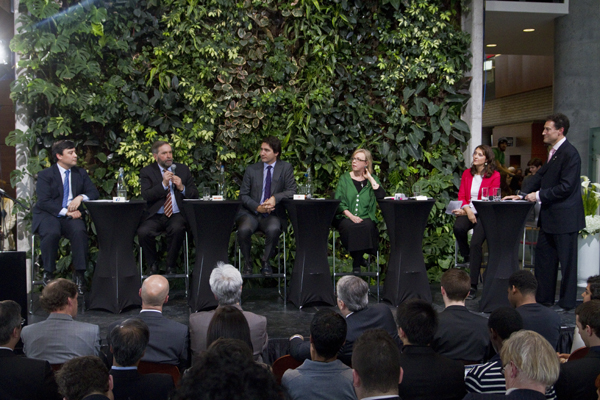 Harper should answer for the many who would be denied vote

On March 25, the University of Ottawa  hosted I Vote, an event in which the leaders of Canada’s major political parties spoke to students about the Canadian political process and how to encourage youth engagement. They did not however, adress the Fair Elections Act (FEA), a bill proposed by the Conservative Party, which would directly limit youths’ ability to vote.

Thomas Mulcair (NDP), Justin Trudeau (Liberal), and Elizabeth May (Green) were all in attendance. Not surprisingly, Stephen Harper was not.

The Act’s intention, put forward by Pierre Poilievre, minister of state for democratic reform is to ensure that every Canadian who votes is a valid, registered voter who can identify themselves. The idea is to tackle voting irregularities, but most of these irregularities stem from the Conservative Party itself — think back to the Robocall scandal and the Conservatives exceeding their campaign spending in the last election.

More troubling are some of the serious consequences that would result from some of the bill’s other provisions. If the FEA passes there will be no more “get out and vote” campaigns from Elections Canada, which encourage civic engagement by reminding us to vote, and no more voter information cards (VIC) or the use of the vouching system, which 120,000 citizens relied on for their right to vote in 2011.

Most troubling is that the FEA would encourage money politics. Parties would no longer have to provide supporting documentation for their expenses, and funding expenses would be exempt from spending limits. It would also increase the cap on individual donations from $1,200 to $1,500 per year, and the cap on candidates’ contributions to their own campaigns from $1,200 to $5,000.

A group of Canadian scholars, including many from the U of O, wrote an open letter to the National Post about their concerns with the FEA, explaining how it would “damage the institution at the heart of our country’s democracy.”

A similar letter was sent to the Globe and Mail from international scholars and political scientists all expressing their concern about the passage of the FEA. To them, it threatens Canada’s reputation “as one of the world’s guardians of democracy and human rights.”

The government has cited Election Canada’s Neufeld Report on compliance review to back up their claim that vouching presents an opportunity for voter fraud. But the report did not cite a single case of fraudulent voting stemming from the vouching system. It actually recommended keeping the system in order to protect the right to vote, but recommended that in order to reduce the need for vouching, they could enhance the use for VICs — the very things that this bill would eliminate.

Witold Walczak, legal director of the American Civil Liberties Union for Pennsylvania, who helped strike down the voter ID law in Pennsylvania, calls on Canadians to ask themselves an important question: “Will the number of cases of fraud prevented actually be greater than the number of people prevented from voting?”

Harper doesn’t want the youth vote. So much so that he is trying to make it difficult for young people to actually vote. He knows that Trudeau will be successful in gathering the youth vote, so he has drafted a bill that will make it harder to encourage voting, and will take away the right to vote from some young people. It’s a very smart political move from the Conservatives, but detrimental to the integrity of our election system. f

It’s difficult to define our age group by a couple of sentences—especially when most of us are meandering young adults just starting to discover who we really are. But, undeniably, there are a few distinct things about our generation that makes us, well, us.

Panic has gripped Ottawa elementary school students this week after third grade class president Kyle Tompkins addressed his peers across the city regarding reports that several students are being treated for a potential case of cooties.

Who should edit a political magazine?

Increasingly, the realms of politics and debate are making room for the common person. No longer do we trust in the ability of the elites to govern. In fact, trust has turned to cynicism.